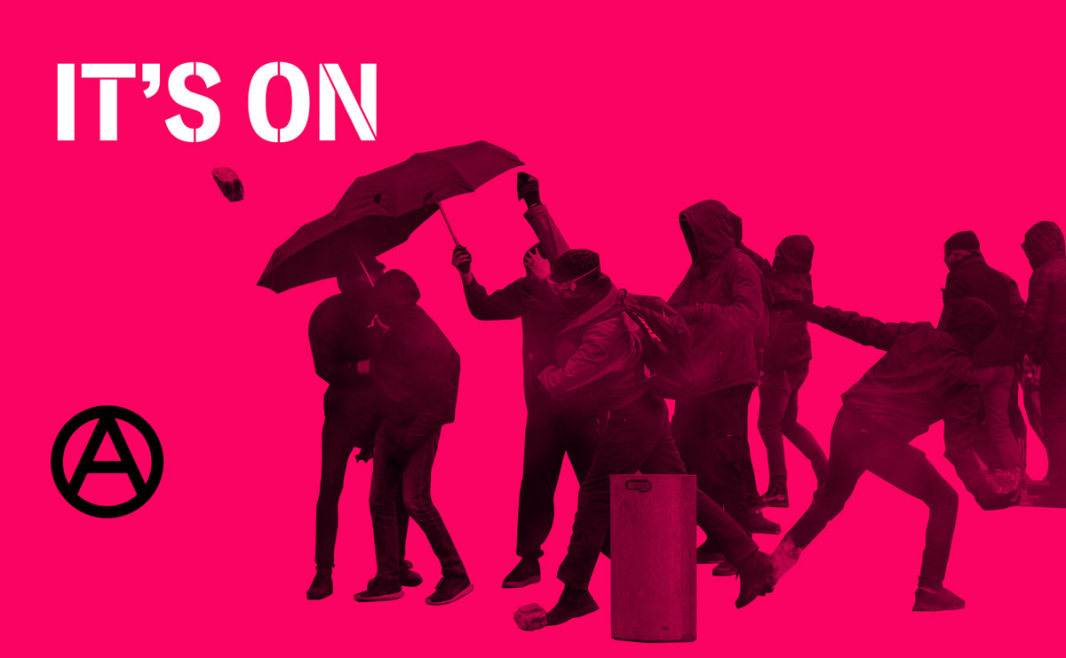 in our last blog posts / newsletters we always wrote about our precarious financial situation and that the crisis and financial precarity are something that will affect us all – stating that it was time for class warfare.

We also still think it's time to organize. Because one thing is clear: those who can benefit from the crisis and the price explosion will do so. The rich and well-off have long been prepared to come out of this period even richer and more well-to-do. All the more important: to counter them with our resistance from below.

There is a justified concern that protests against skyrocketing prices, war and the crisis will once again be taken over by the right. This concern is extremely real in Germany – simply withdrawing and defending the last remaining free spaces may remain the only option in some regions. It is all the more important that where possible, anarchists and the (radical) left engage in the movements and partly overcomes their fear of possibly not clearly progressive movements. Whether in defense against the German reaction on the street or in a militant look ahead – one way or another turbulent times are ahead of us.

The most important thing to prevent right-wing appropriation from the outset is your own clear, understandable and consistent critique of capitalism – which already excludes reactionary ideas and regressive critique of capitalism in the analysis. Our recommendation: read Work – discuss the text and excerpts together, in your groups and outside of each scene bubble.

Of course, other texts criticizing capitalism would do as well, the most important thing is a joint exchange and the development of a clear idea of ​​how this misanthropic economic system works.

There are already some ideas and texts on the price explosion from the left / anarchist point of view [from Germany]. We want to introduce you to a few here – for inspiration, to participate, to discuss or to decide what you don't want to do at all. Feel free to send us more, we will add them later!

Anarchismus.de, for example, offers a material campaign under the motto ›Prices down – wages up!‹. On the site there are also some texts from a class-struggle, more traditional anarchist point of view. The anarcha-communist federation ›die platform‹ also wrote a similar situation analysis with some suggestions on how to react to the crisis. It will probably be a matter of looking at the respective local groups to what extent ›die platform‹ lives up to their organizational requirements.

Meanwhile in Bremen there were the first quite successful protests against the price increases – which also medially received a lot of attention. The alliance ›The prices down‹ seems to be setting up a low-threshold offer in some cities and is definitely worth a look. Under the title ›Winter is Coming: Time to light a fire!‹ the Interventionist Left analyzes the current crisis situation. »Instead of standing by our side commenting and moralizing, we have to act in a melee, wrestle for interpretative sovereignty, lead conflicts and endure contradictions - and be uncompromising where it is necessary: ​​conspiracy theories explain nothing, climate protection is necessary, Putin is waging a war of aggression, Fascism is not an opinion and Nazis get kicked in the mouth, we don't negotiate about that.« Sounds good, but apart from the call for the Vergesellschaftungskonferenz it still gets stuck in vague calls. The friends of the Schwarzen-Ruhr-Uni are more specific in their analysis, which we would like to recommend here in conclusion (and according to which winter is already here).

In this thread on Twitter, the alliance ›Wer hat der gibt‹ is also collecting crisis protests and points of contact.

In all calls and analyzes it is always emphasized how important it is to set up mutual aid projects right now. We fully agree with that, which is one of the reasons why we have started a new category with DIY guides, which are particularly helpful in times of crisis will. You are welcome to help us with building the site with tips. There are already a few initiatives on the specific situation: the 9-euro fund is committed to mobility for everyone in a practical and solidary way. From October there will be a weekly meeting for self-organization and mutual aid in Bochum – an idea that is hopefully already being implemented in many cities, feel free to send us links!

Our biggest obstacle is not knowing our own strength.
– CrimetInc.

p.s.: and again a thousand thanks to everyone who has supported us since the last posts! We are still in trouble, but are (more) optimistic. <3